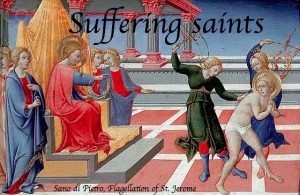 During the seventeenth century, there were more than a hundred Catholic editions in English of exemplary lives of saints and other holy people, most of which emphasize a willingness – amounting sometimes to what appears to be a compulsion – to suffer pain and degradation, in conjunction with avowals of chastity and a rejection of marriage and profane love. Time and again, the twin embrace of chastity and penance is represented as the essential prerequisite for readers aspiring to travel where the saints have trod.

As Rhodes observes, hagiography is ‘a self-perpetuating genre’ (Jan T. Rhodes, ‘English Books of Martyrs and Saints of the Late Sixteenth and Early Seventeenth Centuries’, Recusant History, 22, 1994: 7–25; p. 17), the aim being to inspire the readers themselves to emulate the exemplary lives described; the saints’ first steps towards the path of sainthood would in turn become the first steps of the reader intent on following the same path. The performativity of the text was paramount, and the centrality of chastity and penance can be explained in terms of that performativity. Whereas chastity and suffering were both performable and sufficiently meritorious to mark out those who embraced them as potential protagonists for the next generation of saintly biographies, other behaviour which could be imitated, such as attending mass and saying prayers, or practising such virtues as charity and humility, could be categorized among the attributes of any devout Christian, and was insufficient, in itself, to mark one out for sainthood, while other qualities which would mark one out more specifically as a saint could not be reproduced on demand; one could not perform miracles, or (unless one was highly suggestible) experience visions, or procure martyrdom simply by wishing to do so…

Perhaps the most disturbing aspect of this subordination of other virtues to the embracing of suffering is the way in which becoming modesty about the performance of penances is attenuated into secrecy and, by being made party to the secret, the reader becomes uncomfortably complicit. The young Catherine of Siena ‘sought out a priuie place in the howse, where she might scourge her selfe with a cord, which she had prouided for that purpose’ (Raymond of Capua, Life of Sainct Catharine of Siena, Douay, 1609, p. 16). As a child, Magdalena de Pazzi ‘tooke secretly certaine long stalkes of Orange trees, which were full of prickles, and binding them hard about her head … past a whole night in excessiue payne, only for the imitation of Iesus, who was crowned with piercing thornes’, and ‘in the most secret places of the house … wold be disciplining of her selfe’ (Vicenzo Puccini, Life of Maddalena de Patsi, London, 1687, p. 9). From an early age, Sister Joan ‘whipped herself with chaines of iron, until she drew bloud’ and, when her penances were discovered by a maid, ‘began with newe care, to seeke another place where with more quiete and peace (without being seene or perceiued of the people) shee might alone enjoy God’ (Antonio Daza, Historie of Sister Ioane, St. Omer, 1625, pp. 20–21).

Images of children hiding away in order to inflict pain on themselves are distressing in themselves; that such images should have been presented to readers as admirable models, worthy of imitation, is almost inconceivable. As Sontag observes, the perception of suffering as ‘something more than just suffering, as a kind of transfiguration’ is ‘rooted in religious thinking, which links pain to sacrifice, sacrifice to exaltation – a view which could not be more alien to modern sensibility, which regards suffering as something that is a mistake or an accident or a crime. Something to be fixed. Something to be refused. Something that makes one feel powerless’ (Susan Sontag, Regarding the Pain of Others, 2003, p. 88).

However, Sontag only describes the prevailing cultural paradigm here, and there are more complex strands of perception and attitudes, which perhaps do connect some aspects of twenty-first century behaviour with an earlier, less secular, age. Mullen suggests that, both for early modern saints and for anorexics and selfharmers in modern times, ‘self-mutilation can serve to help reinstate a boundary between the self as non-existent or non-viable, and an imagined self of authority and self-confidence.’ He sees suffering as having the function of ‘replacing the voiceless and inferior self ’ (Robert F. Mullen, ‘Holy Stigmata, Anorexia and Self-Mutilation: Parallels in Pain and Imagining’, Journal for the Study of Religions and Ideologies, 9.25, 2010: 91–110; p. 102) with a sense of what Glucklich (drawing on Bell), calls ‘autonomy and even empowerment’ (Ariel Glucklich, ‘Self and Sacrifice: A Phenomenological Psychology of Sacred Pain’, Harvard Theological Review, 92.4, 1999: 479–506; p. 501. See also Rudolph M. Bell, Holy Anorexia, Chicago, 1985, pp. 17–20.).

(Adapted from Part 1, Chapter 2, ‘Suffering and Sexuality in Catholic Hagiography’.)