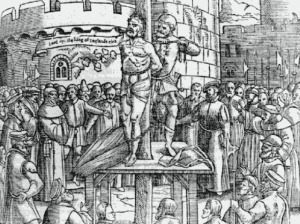 Unlike Catholic suffering, which (at least in its monastic context, where penance went hand in hand with chastity) was frequently overtly linked with sexuality, Protestant suffering generally relates to sex only obliquely. Whereas, for example, Anthony of Padua’s biographer explicitly traces the saint’s determination to eradicate sexual desire by means of ever more severe mortification of the flesh (Luca Assarino, The Life of St. Anthony of Padoua,, Paris, 1660, pp. 10–21.), the ‘eroticized violence’ in Foxe’s Actes and Monuments ‘haunts the margins of the text’ (James C.W. Truman, ‘John Foxe and the Desires of Reformation Martyrology’, English Literary History, 70.1, 2003: 35–66; p. 40) – except, of course, in passages where the papists are excoriated as ‘sodomites’, and their acts of violence imbued with overtones of sexual perversity (vividly illustrated by the graphic woodcut of Bonner scourging a Protestant in the 1563 edition). Rather than drawing conclusions from what Foxe says, one is forced to surmise from what he skirts around; for example, despite his attacks on Catholic sodomites, Foxe is much more circumspect in his condemnation of homosexual activity than his predecessor and mentor John Bale had been, and Betteridge surmises that this is because ‘in Acts and Monuments close and potentially homo erotic relationships between Protestant men are often held up as exemplary and commendable’, concluding, ‘A distinction is implicitly drawn in Acts and Monuments between a homoeroticism that is humanist and ordered and a sodomy that is represented as disordered and bodily’ (Tom Betteridge, ‘The Place of Sodomy in the Historical Writings of John Bale and John Foxe’, in Betteridg, ed, Sodomy in Early Modern Europe, Manchester, 2002, pp. 11–26; pp. 17 and 23).

Betteridge’s language is – rightly – circumspect (‘potentially’, ‘implicitly’); he holds the line between reading from the text and reading into it, a line that Truman dares to cross in his reading of sexual (frequently homoerotic) implications in Foxe, among them the woodcut of Thomas Bilney and Dr Call (Actes and Monuments, p. 467) which, Truman says, ‘exposes the interplay between the suffering of martyrdom … and the physical intimacy of early modern male friendship’ (Truman, p. 52) – an assertion to which Freeman and Evenden respond with the wry comment, ‘Truman does not explain why Foxe would have chosen to depict Bilney in this way or why no one, including generations of Foxe’s Catholic critics, seemed to have understood, or commented on, the homoerotic dimensions of this picture’(Thomas S. Freeman and Elizabeth Evenden, Religion and the Book in Early Modern England: The Making of John Foxe’s ‘Book of Martyrs’, Cambridge, 2011, p. 214, footnote).

The first of these questions scarcely matters; the author, as Roland Barthes reminds us, is dead. As to the second, Severin’s words, in Sacher-Masoch’s Venus im Pelz, may be illuminative:

I was prematurely developed and impressionable when, at the age of ten, the legends of the martyrs came into my hands. I remember reading with a kind of horror, which was really delight, how they languished in prison, were put to the rack, shot through with arrows, boiled in pitch, thrown to wild animals, nailed to the cross, and suffered the most horrible things with a kind of joy. (Leopold Ritter von Sacher-Masoch, Venus im Pelz, in Sacher-Masoch, Das Vermächtnis Kains, Stuttgart, 1870, part 2, pp. 121–367; p. 191.)

It matters little whether the legends the young Severin read were Catholic, Protestant, of the early Christian martyrs under the Romans, or something else entirely. Nor does it matter that Severin is basically heterosexual in his orientation. The point is that, if Severin was unique, Venus im Pelz would never have made it beyond a first printing; he is not unique, and it is reasonable to suppose that other readers over the centuries will have turned the pages of Foxe’s book with a similar horrified rapture, engaging with the text – and its illustrations – in ways that have little to do with Foxe’s overt intent: ‘Religious warfare and persecutions created [a] public sphere of torturer and tortured; when those ceased, compendia like Butler’s Lives of the Saints and Foxe’s Book of Martyrs kept the imagery of punisher and punished available for edification and/or fantasy’ (Bonnie Shullenberger, ‘Much Affliction and Anguish of Heart: “Story of O” and Spirituality’, Massachusetts Review, 46.2, 2005: 249–72; p. 25.).

Marshall, too, accepts that ‘Foxe’s text offers a form of sadism avant la lettre – a pleasure derived from three interlocking dialectics of (de)valuing the flesh, promoting/erasing individuality, and strategically collapsing the domains of word and deed’ and recognizes that, while ‘neither he nor his martyrs were sadistic or masochistic’, ‘readers … could respond more variously and transgressively, in ways we can identify as sadistic or masochistic’ (Cynthia Marshall, The Shattering of the Self: Violence, Subjectivity, and Early Modern Texts, Baltimore, MD, 2002, pp. 102 and 103). It would be surprising if Truman was the first to find homoerotic implications in the depiction of an imprisoned man burning his hand with a candle in an attempt to prepare himself for being burned at the stake, while being watched intently by another man who is curled up in bed (the only bed), but it would hardly be surprising that others did so furtively and in secret.

(Adapted from Part 2, “The Suffering of Others”, Chapter 5, “The Spectacle of suffering”.)