A discourse community can be defined as having six clear characteristics:

1. “A discourse community has a broadly agreed set of common public goals.”

2. “A discourse community has mechanisms of intercommunication among its members.”

3. “A discourse community uses its participatory mechanisms primarily to provide information and feedback.”

4. “A discourse community utilizes and hence possesses one or more genres in the communicative furtherance of its aims.”

5. “In addition to owning genres, a discourse community has acquired a specific lexis.”

6. “A discourse community has a threshold level of members with a suitable degree of relevant content and discoursal expertise”

Catholics and Protestants meet the above criteria in the following ways: Both groups seek to promote their brand of Christianity (#1). They congregate in churches and publish books and pamphlets both for the benefit of the members of their community and to inform and attract others (#2). Members are kept in touch with the teachings of the community through church attendance and reading the relevant literature (#3). The core values are transmitted via ritual, sermons, communal prayer, works of devotion, etc. (#4). Practices and beliefs are identified through precise terms, some of which are adapted from language in more general use, some of which are common to both groups, and some of which are specific to one or other group (#5). Both communities have trained individuals (priests, vicars, theologians, etc.) who have specialist understanding of the issues and are vested with a certain authority to resolve disputes about the core values of the community (#6).

That’s it. That’s all we’re concerned with here. I understand that this may seem pretty reductive (where is God here, or the soul, or the purpose of life?), and I’m aware that the expression “brand of Christianity” may seem cynical or mocking. It is not intended to be. I’m not attempting to deny the spiritual or confessional values that Catholics and Protestants espouse. It’s simply that they are outside the parameters of this discussion.  For present purposes, these six features are the ones I am interested in.

The early modern Catholic and Protestant discourse communities have two other basic features in common; they share the same origins and they are mutually hostile.

One of the striking features of Protestant adaptations of Catholic literature in early modern England is just how much did not need to be changed in order for a Catholic work to be acceptable for a Protestant readership. Whole chapters – and sometimes entire works – were often publishable with only very minor changes.

One of the most extreme examples is The Profit of Believing (London: Roger Daniel, 1651), a translation of Augustine of Hippo, De utilitate credendi ad Honoratum. Clancy (English Catholic Books, 1641–1700: A Bibliography, Ashgate, 1996) classifies this as a Catholic work, and indeed it probably was, but it was published with a preface which cites Calvin, William Fulke (1538–1589) and other Protestant writers as valid authorities (sig. A2r-v). 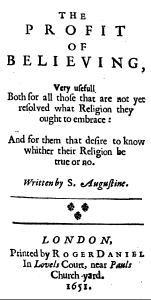 This 1651 edition of The Profit of Believing is an apparently Catholic text with a clearly Protestant preface.

The title page is – perhaps deliberately – ambiguous and, in addition to being published on its own, it was published bound together with four other works as Five Treatises, of which at least three (including this one) have clear Catholic overtones (one of the others supports the doctrine of Mary as the “Mother of God” and the other had been published secretly as a Catholic work in 1623). 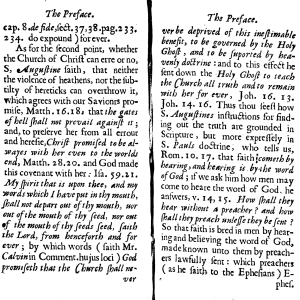 Despite references to Catholicism in the text, the preface cites Protestant sources with approval.

The Protestant references in the preface to this work would appear to be a veneer, disguising the Catholic nature of the text, but the printer, Roger Daniel, could also have protested that the word “Catholic” in the text was intended to designate, not the Roman, but “‘the Antient Catholick Apostolick Faith, held forth in the Church of England” (John Goodman, A Serious and Compassionate Inquiry into the Causes of the Present Neglect and Contempt of the Protestant Religion and Church of England [London: Robert White for Richard Royston, 1674], p. 6), that is, the faith of the early Christians, before the Church had been corrupted (as the Protestants saw it) by Romish doctrines. (See “An Annotated Catalogue of Protestant Editions in English of Works by and Relating to Saint Augustine of Hippo, 1529-1700” for further details of this work.)

Another work which is illuminating in this context is Edmund Bunny’s adaptation of the Jesuit Robert Persons’s The First Booke of the Christian Exercise Appertayning to Resolution (1582). Despite the accusations of piracy and worse levelled against Bunny, he made only the minimum changes necessary for the work to be openly publishable under English law, and “did not take hundreds of other opportunities to add phrases … that would have given the work a more obviously Protestant tone” (Brad Gregory, “The ‘True and Zealouse Service of God’: Robert Parsons, Edmund Bunny, and The First Booke of the Christian Exercise“, Journal of Ecclesiastical History 45, no. 2, 1994, pp. 238–68; p. 243). (See “Robert Persons’s Resolution (1582) and the issue of textual piracy in Protestant editions of Catholic devotional literature” for a discussion of the ins and outs of textual “piracy”.)

This of course begs the question of what a “Protestant tone” would have meant at that time. Obviously words relating to points of doctrine would define a text as Protestant or Catholic, but it goes further than that, particularly – and this is a subject I will deal with more fully in a later post – when it comes to the language of suffering:

As Toby Matthew notes, what we might call the common-sense values of the Old Testament – “Riches, Plenty, Posterity, and the like” – were “degraded” by the life and example of Christ and replaced by “their contraryes, [such] as Paine, Poverty, Persecution, Chastity, and Humility” (in Vicenzo Puccini, Life of the Holy and Venerable Mother Suor Maria Maddalena de Patsi, Saint Omer, 1619, preface, sig. ***3v). These, for Matthew, are the true Christian virtues, and from his perspective the Protestant world-view signals a rejection of the message of Christ and a return to Old Testament values.  Matthew merely picks out a few representative terms here; many others – ‘suffering’, ‘humiliation’, ‘mortification’, ‘contempt’, ‘flagellation’ and so forth – could be added. Taken in their totality, these words represent the monastic values of a millennium of Christian tradition on which Protestants effectively turned their backs, claiming it to be a perversion of the teachings of Christ. This rejection of monastic values leads, in turn, to a stigmatization of the language associated with these values. (Pain, Pleasure and Perversity, p. 74, adapted.)

When Simon Patrick came across Augustine Baker’s retelling of a tale from Walter Hilton’s Scala Perfectionis (in Serenus Cressy’s Sancta Sophia; or Directions for the Prayer of Contemplation &c. vol. 1, pp. 45-55, Douai: John Patté and Thomas Fievet, 1657), he was able to adapt it to his own purposes with very little deviation from the sense of the Catholic original.  The story is of a pilgrim on the way to Jerusalem faced with various different paths all purporting to be the one true path. Baker specifies just what that true path is with the words, “Before thou set the first step into the high way that leades thither, thou must be firmly grounded in the true Catholicke faith”.

Augustine Baker’s The Parable of a Pilgrim, a retelling of a tale from Walter Hilton, was published for a Catholic readership in 1657.

Patrick acknowledges the Catholic source of his text in the preface to  The Parable of the Pilgrim (London: Robert White for Francis Tyson, 1665), but he  does not refer explicitly either to Catholicism or Protestantism either here or in the body of the text. In a sense, then, his text bears comparison with that of Roger Daniel’s edition of The Profit of Believing; there are very few discursive features which identify the text as either Catholic or Protestant and the reader is left to infer which is the true f

Although Patrick’s text (which is over 500 pages long, compared with the ten pages or so of Baker’s text) does not contain any explicit references to Catholicism, it nevertheless reproduces much of the lexis of Baker’s text. The key phrase, “I am nought and I have nought and I desire nought but Jesus and Jerusalem”, repeated several times in Patrick’s text in slightly different forms, is based on Baker, who also repeats it with slight variations. Most of the concepts that Baker touches on – faith, sin, conscience, humility, charity, suffering and so on – are taken up and developed by Patrick. This is not to say that there aren’t significant differences (I’ll come back to some of these in a later post), but there is a considerable amount of overlap. 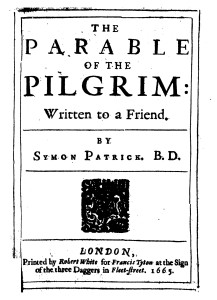 Simon Patrick’s The Parable of the Pilgrim (1665) is a Protestant adaptation of Baker’s work.

Part of the reason Patrick is able to draw so closely on Baker’s work is that Catholic and Protestant discourse developed at this time partly in tandem, that is to say, Catholics frequently wrote taking Protestant views into account and vice versa. For example, Baker shows a clear awareness of the Protestant doctrine of justification by faith rather than by works when he writes “though thou hast done to thy seeming neuer so many good deeds both outvvard & invvard, yet in truth thou hast nothing at all, for nothing vvill abide in thy soule & fill it, but the loue of Iesus” (p. 488). Of course, this has its roots in John 15.5 and in Augustine, and is equally a part of Catholic as of Protestant doctrine, but Baker’s emphasis on it appears to be by way of making the point that Protestants do not have the monopoly on justification by faith.

I’ll finish this post by turning again to Edmund Bunny. Bunny’s adaptation of Persons’s work is so frequently dismissed as a “piracy” that the accompanying Treatise Tending towards Pacification has generally been overlooked. For anyone interested in Protestants and Catholics as discourse communities it is well worth studying in some detail, as it is (I think) the first attempt at a detailed analysis of Catholic and Protestant discourse. Bunny approaches the question from the point of view of translations of the Bible, the central issue for him being whether or not “how much soeuer we praetend to haue the word of God to direct us in al our doings, yet, by the means of wrong translations, we haue nothing at al indeed” (p. 63). He aims to clarify “what they [Catholics] or we [Protestants] haue gained or lost by our translations, in the pith or substance of translation”, and makes a distinction between “some faults that concern the words alone [i.e., semantic issues]: and some that concern the matter too [i.e., substantive issues]” (p. 66). He argues that as long as Catholics were refusing to translate the Bible at all there was a substantial issue at stake, but now that Catholics were themselves translating the Bible into English (the Douay translation of the New Testament had come out just a few years earlier, in 1582) “there is little else against us but quarrel of words” (p. 72).