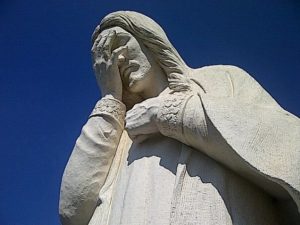 First off, I should say I was in the middle of writing a blog post on a lecture on ecstasy (the emotion, rather than the drug, though the latter did get a couple of mentions!) that I’d been to in London when there was a bereavement in the family and everything got put on hold for a couple of months.

Then my server went and did some weird things and I lost the blog entirely for several weeks. I finally got it back, minus the draft of that post on ecstasy, which appears to be irretrievably lost in cyberspace. I’ll try to recreate it sometime, but before I get back to writing my own blog posts, I’ll start off by giving some links to one or two blogs (well, three actually!) I’ve come across that might be of interest.

First off, there’s some gruesome stuff by Caitlin Green on humiliation and death by camel. You need to scroll down to about the middle of the article to get all the sordid details:

we will take Andronicus, and we will strip him stark naked, and we will bind him to the camel’s back in such fashion that his face shall be against its rump, and we will lead him from one end of the city even unto the other. Thus will all they, both men and women, whom he hath wronged, be able to avenge themselves right well.

As Dr. Green Tells us, this is “the last recorded instance” of this punishment, which was inflicted on “the deposed emperor Andronicus I Comnenus in AD 1185″. The above is the contemporary account of Robert of Clari.

For the sake of early modernists, who will be heartened by the news, I’ll just add that the story was kept alive for Elizabethan readers by Richard Knolles, who describes it with no less detail than disapprobation in his Turkish History (1687-1700):

…having one of his Eyes put out, he was set upon a foul lean Camel, with his Face towards the tail thereof, and so (as it were in Triumph) led through the Market place, his bald Head all bare, as if it had been a dead mans Skull taken out of a Charnel House, in a short old Coat; so miserable a Spectacle, as might have expressed a fountain of tears out of the Eyes of a right hard hearted man. But the Bedlam and most insolent Citizens, especially they of the baser sort, as Cooks, Coblers, Curriers, and such like, flocking about him like Bees (without regard that he had but the other day worn upon his Head the Imperial Crown, then honoured by them as a God, and extolled unto the Heavens; that they had not long before solemnly sworn him Obedience and Loyalty) ran now as men out of their Wits, omitting no kind of Villany they could devise to do unto him; some thrust nails into his Head, some cast dirt in his Face, some the dung both of Men and Beasts, some prickt him in the Sides with spits, some cast Stones at him as at a mad Dog, and other some opprobrious and despiteful words, no less grievous unto him than the rest; amongst others, an impudent Drab coming out of the Kitchen, cast a pot of scalding water in his Face; and in brief, their outrage so exceeded, as if they had striven among themselves, who should do him the greatest Villany. Having thus shamefully, as in a ridiculous triumph brought him into the Theater, they there betwixt two Pillars hanged him up by the Heels… (p. 38 →Read on EEBO TCP)

The second link is to Susan Abernethy’s post on Titus Oates, fabricator of the so-called “Popish Plot”. She gives an account of his checkered career, which culminated in him being “stripped, tied to a cart and whipped from Aldgate to Newgate. The whippings continued the next day.”

I’ve always been fascinated by the plot, and have a page on it here. What strikes me most is the fact that that the 1689 Bill of Rights, which includes the prohibition of “cruel and unusual” punishment, was in part a protest against Oates’s beating (which left him with the skin hanging off his back), with scant regard for the Catholics who died or lost their homes as a result of his lies.

As a footnote to Dr. Abernethy’s post, there’s an anonymous broadside of 1681 that gives an idea of what the scandalous conduct that got him kicked out of the Jesuit college at St. Omer might have consisted of. It accuses him of whipping ‘porkers’ to arouse his ‘Beastly Concupiscence’, whereupon he ‘Tilts at ’em with his Nasty Clyster-Pipe’ (The Character of an Ignoramus Doctor, London, 1681, p. 2). Gordon Williams (A Dictionary of Sexual Language and Imagery in Shakespearean and Stuart Literature, vol. 1, London, 1994, p. 514), says ‘porkers probably means fat youths’ and the reference is presumably homosexual. 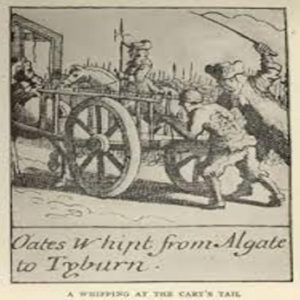 OK, that’s enough of the sleazy, sordid and downright nasty side of early modern life! My final link for today’s post is to Laura Sangha’s entry in the many-headed monster blog to her jointly-edited (with Jonathan Willis) publication on Understanding Early Modern Primary Sources, which I have not yet perused, but which looks set to be a must for students and scholars embarking into the field in this digital age.

And now, my wife tells me, it’s time to get offline and have some curry. I’ve acquiesced, on condition it comes with a beer!