Sharon Howard, ‘Imagining the Pain and Peril of Seventeenth Century Childbirth: Travail and Deliverance in the Making of an Early Modern World’, Social History of Medicine, 16:3 (2003), pp. 367-382, is one of those articles that appeared some years ago, but which I have only just come across. (The link, by the way, is to an open-access final proof of the article; to see it in published form log into Oxford Journals.) Hannah Newton, ‘”Very Sore Nights and Days”: The Child’s Experience of Illness in Early Modern England, c. 1580–1720’, Medical History, (2011), pp 153-182, picks up on a point made by Howard, saying, ‘According to Sharon Howard, seventeenth-century lay-people probably learned of torture not from the judicial system, but from the literature of Christian martyrdom’ (Newton, p. 163, referring to Howard, pp. 374-5 [p. 11 of the proof]). 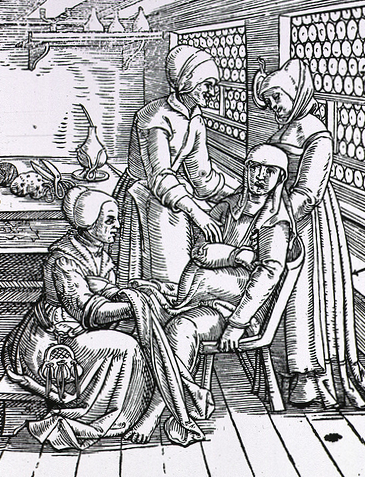 Make this fire of affliction instrumentall to purge the drosse of all my sinns of negligencys, ignorances, and willfull transgressions, that I may come out like gold out of the furnish.

The extent to which both men and women identified with suffering martyrs is one of the recurrent themes of my research, so naturally this account piques my interest. Newton notes that children, too, would liken their sufferings during illness to those of the martyrs:

…twelve-year-old Charles Bridgman in 1632 … when considering his pains … ‘called to mind that Martyr Thomas Bilney’, who had burned his own finger in a candle to give himself a taste of what it would be like to burn at the stake.64 Girls as well as boys mentioned martyrs in this way. Fourteen-year-old Mary Glover compared herself to her grandfather, who died a martyr, by repeating his dying words, ‘The comforter is come. O Lord, you have delivered me’. (P. 163)

Of course, as Newton goes on to say, those in pain could see their sufferings either in terms of the redemptive suffering of the martyr, or as a foretaste of the sufferings of the damned. And a third major factor in the way early moderns may have conceptualized their pain ‘in the context of possession’, with its belief in”familiar spirits” …. [which] were animal-shaped evil spirits used by witches to harm or possess their victims’ (p. 165). Newton cites Keith Thomas, Religion and the Decline of Magic 1971, repr. London: Penguin, 1991, p. 566, for the view that children were particularly likely to have recourse to such imagery.

What I want to try and find out more about is the response, particularly of women, to the depictions of suffering in works such as Foxe’s Book of Martyrs, not when they were ill or experiencing the pangs of childbirth, but when they were in a state of health. I’m interested in evidence of women identifying transgressively or subversively with such texts (and, of course, with the images contained in those texts) and gaining a perverse satisfaction from the depictions of suffering.

Certainly, Mary Wroth describes scenes of both male and female suffering with tremendous relish (a subject I touch on both in my monograph and in one of my blog entries). Rather than seeing her as colluding in the gratification of the male gaze, her frank enjoyment of scenes of suffering (not a few of which – Polarchos at the hands of the Princess of Rhodes, Selarinus humiliated before the Queen of Epirus – involve male victims of female tormentresses) suggests to me a lively female eroticism. Wroth’s vivid description of a jousting tournament – ‘the cruellest, and yet delightfullest Combate, (if in cruelty there can be delight) that Martiall men euer performed’ (The Countesse of Mountgomeries Urania, London, 1621, p. 62) – is a clear account of the erotics of the female gaze, and I am interested in exploring that gaze and its role in seventeenth-century sexual politics. All leads and suggestions welcome!

Probably of relevance to Daniel Goldberg’s comments on the history of pain (which I commented on in my last post) is Charles Rosenberg on ‘The Efficacy of Placebos: A Historian’s Perspective’ (Harvard, May 21). Goldberg has quite a lot to say about placebos, and their place in the history of the perception of pain, and Rosenberg will doubtless have plenty more to say on the subject. Too bad I’m thousands of miles away from Harvard! Perhaps there’ll be a transcript, or even a podcast…

My attention was caught by two recent publications in the blog of The Appendix (‘a quarterly journal of experimental and narrative history’). The first is ‘Interpreting “Physick”: The Familiar and Foreign Eighteenth-Century Body’, by Lindsay Keiter. The second, in reply to the former, is Daniel S. Goldberg on ‘The History of Pain’ [UPDATE: Goldberg’s piece is no longer available at its original location and I have not been able to track it down elsewhere). 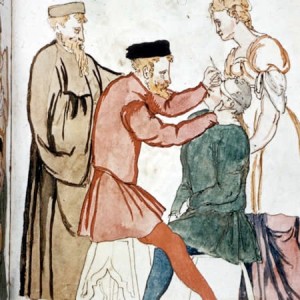 The last couple of months have been pretty hectic and I haven’t had much time to post here, so let me give a brief rundown of recent developments.

First, let me start with the stuff I’m missing out on, being here in Japan. I was sorry to miss a roundtable discussion on Violence, Victimhood and Virtue, Friday 2 May, 4:30-6:00 (with tea from 4 p.m.), Colin Matthews Room, Radcliffe Humanities Building, Woodstock Road, Oxford. The central question – ‘How do readers engage with a hero or heroine’s suffering, courage, pain, and defiance?’ – is right up my street, and I should have been very much in my milieu sipping tea in those august surroundings, listening to Eva Miller holding forth on ‘The Suffering Male and the Female Gaze in Modern Popular Culture’ and Kate Cooper on ‘Early Christian Martyr Narratives and the “Viral” Emotions’. But, alas, it was not to be!

I will also be unable to attend the conference on Early Modern Women, Religion and the Body (Loughborough, July 22-23), though at least I will be able to follow proceedings via Early Modern Women on Twitter. I’m especially interested in the following topic areas:

Yet another conference I missed out on was The Hurtful Body (Royal Flemish Academy, Brussels, November 21-22, 2013). This seems to have been a very fruitful meeting of minds and I was flattered (despite not being able to attend personally) to be invited to contribute a chapter to a collection of papers arising from the conference. The emphasis is on the visual arts, which lies beyond the province of my normal text-based research, and I am not sure whether I can come up with something that will satisfy the editors’ requirements, but I certainly intend to try!

Another little feather in my cap was an article in the latest volume of Recusant History (May 2014), which is out in print but doesn’t seem to available online yet. It’s on the general topic of ‘The Protestant Reception of Catholic Devotional Literature in England to 1700’, and isn’t related to attitudes towards suffering, but it’s from my research into Protestant readers of Catholic texts that I approached the whole subject of early modern suffering, so there’s a link there somewhere!

If that floats your boat, I’ve got another, related, paper coming out in the next issue of Reformation and Renaissance Review, entitled ‘Robert Persons’s Resolution and the Issue of Textual Piracy in Protestant Editions of Catholic Devotional Literature’. Again, it’s about the Protestant reception of Catholic literature rather than about issues relating to suffering, but it was through a study of Protestant readers of Catholic literature that my attention was drawn to the two radically different discourses of suffering developing synchronously during the seventeenth century.

I will be in Cambridge in September, for the Reformation Studies Colloquium and, between one thing and another, I’ll be in the UK for much of the summer. I will be in need of light relief, uplifting company, good food and beer, so like-minded individuals please take note & get in touch!

I’ll be back in due course with some more tidbits on suffering, but not for a while perhaps. Gird your gonads, grit your teeth and settle in for a bit of a wait!

UPDATE: The report on the Early Modern Women conference is here.

The Hurtful Body has been published, and my chapter on Masochism and the Female Gaze is included in it.